Christ and other Masters of Truth

Again, Christ and other Masters have, in course of time, to pass away from the earth-plane and yet They live in Shabd form within, but out of space and out of time. Bound as we are with One or the other of them, we naturally wish to live and die for them. But little do we know how to contact Them within our own self.

Such a contact is possible and well within our reach if we but find a Shabd Swaroop or Word Personified Teacher competent to link us with the Word, nay transform us into the Word in which all Masters of ages gone by eternally live. 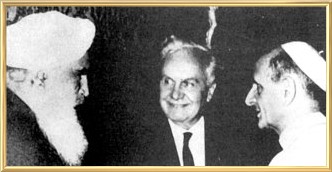 Kirpal Singh with Pope Paul VI during a meeting in Rome 1963.
Later on Pope Paul VI went to Jerusalem to carry the cross himself as a symbol.

I am reminded of a lady who met me in America during 1955. She used to greet Christ within herself and was thus self-satisfied and did not like to make further attempt to advance further on the Spiritual Path. One day I casually suggested to her to ask Christ as to what further steps He would prescribe for Inner Progress. The following day she came and warmly pressed for initiation, remarking that Christ had directed her to seek the guidance of the Living Perfect Master if she desired to advance further.

The Powers within never obstruct the seekers after God; and if one is in contact with an ancient Master, He readily and gladly tells His devotees what to do for the next steps on the Spiritual Path.

Naam is available for all those, who truly want to reach God. Through the Grace of the One God and the God working through our Master Kirpal Singh, the initiation is given as a free gift just as at the times of the Master-Christ.

Source: Composed by Bhai Jamal using extracts from ‘The Mystery of Death – Introduction,’ by Kirpal Singh, 1894–1974.