The Unity of Man World Conference began with a great procession – a demonstration of Unity: 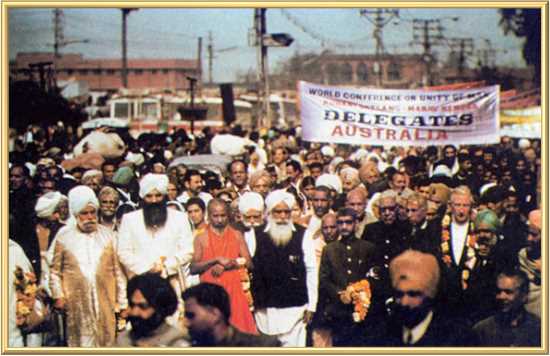 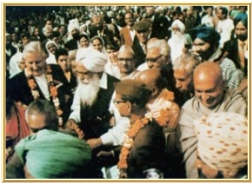 A crowd of more than hundred thousand participants from eighteen countries of this world, men, women and children, people of the most different races, nationalities and religions betook themselves together, united – in the spirit of the existent Unity of Man – on a march through the main streets of New Delhi, three and half miles from the Gandhi Place to Ramlila Grounds, the meeting place of this Conference.

Represants and the heads of different social religions led this uniting procession of symbolic importance together at the site of Kirpal Singh.

During the procession calls were sounding concomitantly:

At least one single, undecorated elephant accompanied the procession as a symbol for the participation of the lower life forms.

The following counties were represented by delegations:

It was unique, the first of its kind since the time of Ashoka.

Amongst others the following personalities were involved in the success: 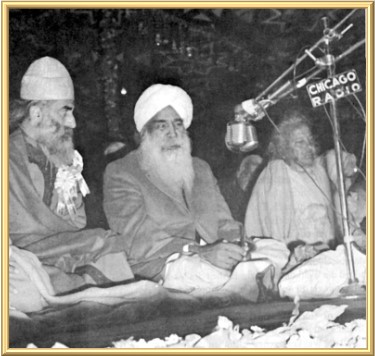 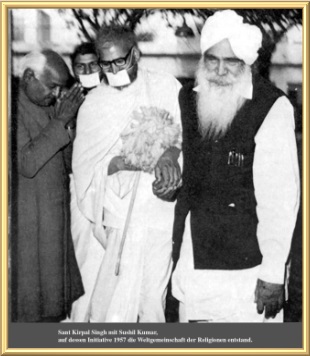 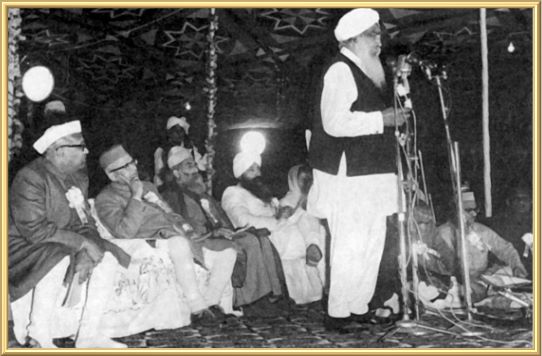 The conference was opened in the evening of 3rd February 1974 by the Vice-president of India, Dr G. S. Pathak. Kirpal Singh held a monumental speech on the Unity of Man.

The third session – the official main session – at the morning of 5th February included a speech by prime minister Indira Gandhi who was welcomed by Kirpal Singh with a loving short welcome speech.

At the final session on 6th February – the Birthday of Kirpal Singh – the foreign minister of India, Sri Swaran Singh, spoke in the evening. Additionally many other ministers of the Indian Union, members of parliament and state officials as well as many other persons, as disciples of Kirpal Singh held speeches or participated in the discussions of the committees. In that evening Kirpal Singh held a speech on the aim of the Conference and the aim of the movement of the existing Unity of Man. (A Circular Letter on that subject was published by Kirpal Singh at a later date, on 15th May 1974.)2

Retrospective it can be said that the predominant sensation of all participants over the gotten realisations, implemented through this Conference, was souled with joy:

This work will be carried on still further when we realise together that God acts through our neighbor, our brothers and sisters in this world, hence through all people.

One wonders about those who profess religion, which marks a connection between man and God, can take the risk of forgetting that he is a man, born with the same privileges of God as the one whom he hates and that he is a conscious entity, a drop of the Ocean of All-Consciousness.

We all should, everyone for himself, resist with best efforts from the tentation to place our own welfare before the necessary and so needful welfare of our brothers and sisters. Furthermore we have to realise that each human being that meets us in the everyday life is a child of God. Moreover it is our common duty to relieve the sufferings of the people and to remove the still existing separation between men – caused by deep oblivion.

The World Conference was a great success. In this sence the aim of the Conference will never end.

Dear Sisters and dear Brothers, please try to understand, that we are already all One!

The whole creation is the temple of God. There is no place where He is not. In minerals life is sleeping; in plants life is dreaming; in birds and animals life is awakening; and in man life is awake. As such we are brothers of all creatures, of plants, of birds and animals. So the flowers and trees sparrows and doves are as members of our own Order. How simple, pure, loving and beautiful they are! We should learn lessons of leading lives of purity, holiness, simplicity and Divine love from them.

Explanation: 1) These words are a concise summary of the explanations on the Unchangeable Truth, as It is proclaimed by Kirpal Singh, the patron of the Unity of Man World Conference. He Himself said analogously: “I came to reveal the Unity to you, the Unity that exists since the beginning and has simply been forgotten.” When He was once asked how comprehensive the teachings of Truth were, He answered: “Truth fits into a nutshell.” The given answer seemed to be inscrutable, until He explained the following: “Be good, do good, be One.” Furthermore He said: “If knew how simple Truth is, you all would cry.”

2) On 15th May 1974 Kirpal Singh wrote a Circular Letter to His disciples in English language wherein He explained without ambiguity that the campaign of the existent Unity of Man must be spread above the level of religions, and that this campaign, this ‘dynamic of hearts’ will neither be tagged with a new nor with an already existing organisation as Ruhani Satsang but that it will be carried out by the enthusiasm of all enthused people.