The passed Resolutions of the Unity of Man Conference

The World Conference on Unity of Man noted with gratification the tremendous response of the common man in all parts of the world to the call for Unity. Recognising the demand for peace and Unity the Conference concluded that today there is dire an urgent need to promote in thought, word and deed the Eternal Values of Love, non-violence, Truth, tolerance and selfless service of humanity in the hearts of men. The conference looks for guidance to Holy Men to help free mankind from fear and ignorance and transform modern man into a whole man who is at peace with himself and with those around him. The conference concluded that all religions are in essence One, and that their main purpose is to lead mankind on the Path of Love and selfless service

Where as the World Conference on the Unity of Man convened by Sant Kirpal Singh Maharaj Ji in February 1974, composed representative religious and political leaders of India and abroad, demonstrated the overwhelming public appeal for World Unity, the need was felt to device practical means of implementing this wish which the conference believes is one felt throughout the masses of mankind in our time.

That the World Conference on the Unity of Man resolved that UNESCO be addressed to encourage among world youth fuller understanding of the common ethical root of all faith through organised, nation wide study of each other’s religions and to appreciate their contributions to the prevailing moral basis of mankind and secondly to encourage the same through available commonly to the people.

That the World Conference on the Unity of Man records its firm conviction that mankind and that the well-being or ill-being of one individual affects all humanity.

The Conference records its conviction that Spiritual Awakening with Love as its basis is the foundation of the Unity of Man. 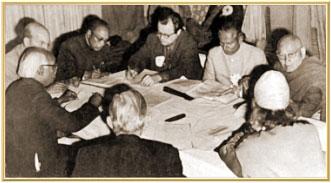 Signed in a row: